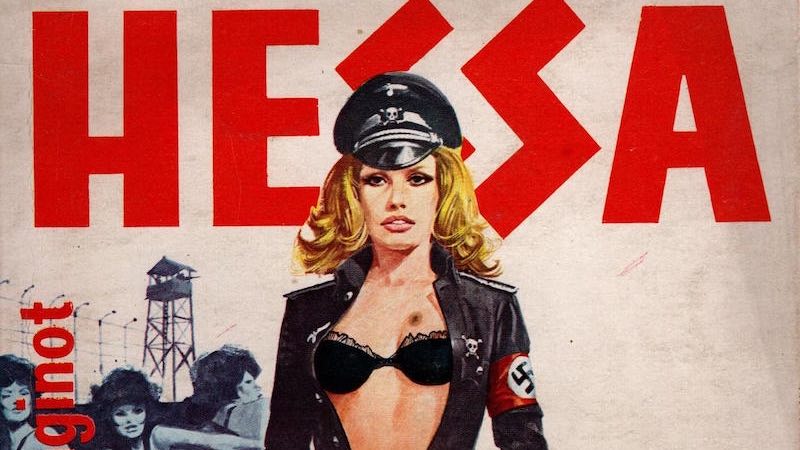 The Hessa series spanned 47 episodes from 1970 to 1972. They followed the improbably sex-sodden adventures of Obersturmbahnfuherin (I think I got that right) Hessa von Thurm, the indomitable virgin leader of the Sex Sonder Sturmtruppen (SSS), a cadre of German fräuleins specially trained to use sex as their secret weapon.

I can see the place now, but I cannot see whom I was with. I expect my shame blanked them out.

Even though I cannot see them, I can still be fairly sure of the dramatis personae. My brother may or may not have been there. There were two Swiss boys, slightly older than us, their names long forgotten, that we used to hang out with. They introduced me to cigarettes around the age of 8 or 9. I hated them (the cigarettes, not the Swiss boys) then and have done so all my life.

Having failed to get me hooked onto cigarettes, my Swiss friends tried something harder. No, not Toblerone—porn.

A year ago, in a blog titled The Alien inside us – the lower masculine victimizer, I described my first powerful realisation of the impact that Hessa had. I broke into the collective male unconscious.

This is a cesspit of violent and sexually violent programming dating back to the dawn of patriarchy. It’s inside all of us, even women, depending on how much masculine energy we have.

I call this programming the ‘lower masculine victimizer’ because it believes it has the right to kill, steal and rape to get what it wants. In the blog, I compared this beast inside us with the monsters from Ridley Scott’s Alien series:

The Alien is the perfect embodiment of the lower masculine victimizer. It wants what it wants and will commit any brutality to achieve its ends. You can’t kill the fucker, it has acid in its veins, it drools and doesn’t clean up after itself.

There’s a telling scene—the subject of argument with film censors—where the Alien kills a female crewmember by thrusting its tail spike up between her legs. There it is: the simultaneous slaking of the lower masculine appetites for sex and death. What is recorded history, other than this? In The Politics of Experience, R.D. Laing writes, “we are all murderers and prostitutes.”

I now understand that when my 10-year-old self saw Hessa, it also saw my own capacity for violence and sexual violence. To prevent it, I went into a shutdown that surfaced during my teen years as depersonalisation disorder—a condition where people are physically present but emotionally removed.

I was trying to stop myself becoming one of Laing’s “murderers.”

Despite being in the depths of our unconscious, the lower masculine victimizer can ‘leak’ out and affect our thoughts, actions and behaviours in damaging ways. The closer we get to healing it, the more it tends to show up in our lives.

I wrote The Alien inside us after the lower masculine victimizer reared its ugly head in my life and I hurt someone I deeply cared about. I didn’t murder anyone, but in the process of healing myself I hadn’t been able to stop a little of that Alien acid blood spilling into my own life.

But that wasn’t all. It was only last night that I fully realised the impact Hessa’s titillating exploits had on me.

I not only identified with the comic’s villain, the sadistic Dutch Nazi Van Daele, but I also identified with the victim—Hessa, who was supposed to give up sex to all comers (excuse the pun); if not she would give up her life to slake their sexual rage, just like the tail spike victim in Alien.

I was also trying to stop myself becoming one of Laing’s “prostitutes.”

I constricted both my masculine and feminine energies to try to avoid being either victimizer or victim. It didn’t work—because the dance between victim and victimizer is a fundamental dynamic of patriarchal societies such as ours.

In patriarchy, everyone is both victim and victimizer.

That was what I saw, at 10 years of age, in the pages of a softcore comic—and it was traumatic. Healing that trauma has taken just on half a century.