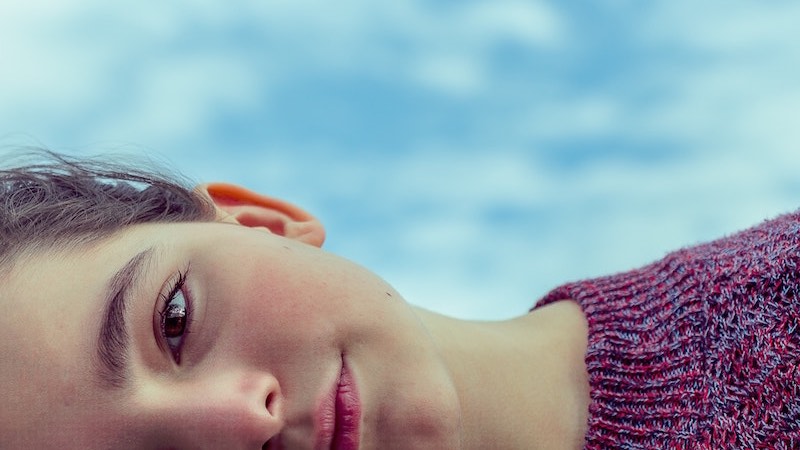 What has this got to do with unconscious shame, generational trauma, the ‘sexual-spiritual split’, the mother wound and the other topics on this site?

Actually, quite a lot…

Hemispheric dominance is one of the key components of what I call the Patriarchal Operating System, the acquisitive, consumptive and destructive psychological model that’s crippling humanity and the planet.

Hemispheric dominance is also known as hemispheric lateralization. It explains how humanity has ended up with a society that is highly intelligent yet at the same time environmentally destructive and woefully lacking in wellbeing.

Hemispheric dominance explains how humanity has ended up with a society that is highly intelligent yet at the same time environmentally destructive and woefully lacking in wellbeing.

Let’s unpack that statement by looking at how the brain divides functions between the left and right hemispheres. 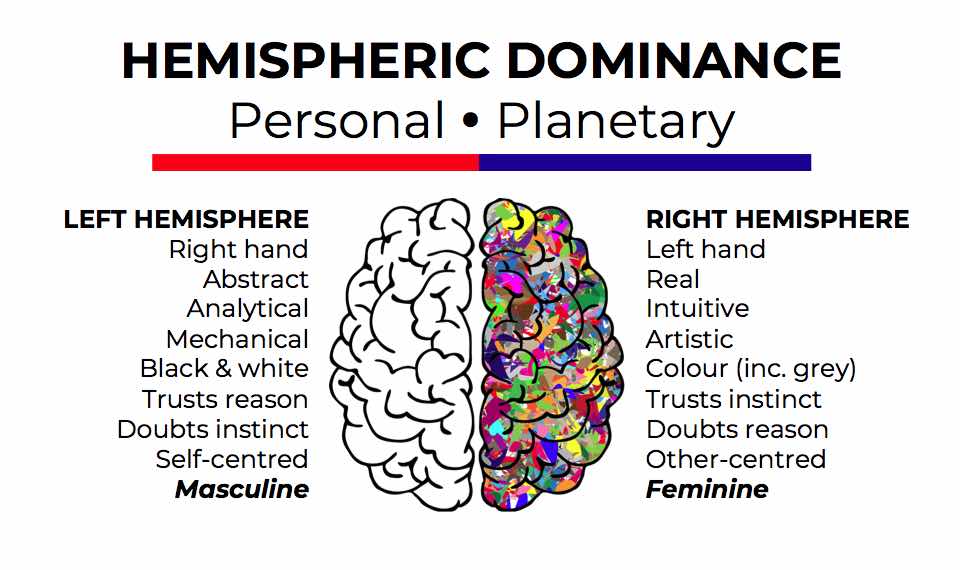 This functional division exists at the micro level of the individual and at the macro level of global society.

This means the left hemisphere is great for logical problem solving (-), while the right is great for community building (+). A society with balanced left-right brain functioning draws on each quality as required.

We do not live in such a world. We live in a left-brain dominant one.

Because of its inability to deal with anything instinctive, irrational, non-linear and non-binary, left-brain hemispheric dominance makes people (and their societies) fundamentally anti-feminine, anti-child, anti-sexual and anti-nature.

This perfectly reflects the current state of the planet. How did we get here?

The Alphabet vs. the Goddess

Alphabets are brilliantly left-brained inventions. Shlain writes: “An alphabet by definition consists of fewer than thirty meaningless symbols that… makes them abstract… Nowhere in the word dog can we discern a dog.”

Shlain traces the spread of alphabetic literacy around the world and the devastation it brought. “Whenever the alphabet appears, so too does madness… The religious wars that wracked Europe… occurred only in those lands impacted by the printing press.”

Shlain concludes by stating that, “The idea that logical, linear thinking is better than intuition and holistic perception was a script written by left-brainers.”

Shlain’s book sheds brilliant light on the spread of patriarchy in general and the emergence of alphabets in particular. However, I disagree with his fundamental notion that invention of the alphabet gave rise to patriarchy.

Alphabets are a symptom, not a cause. If they’re the cause, what brought them about? Why did humanity suddenly start thinking in violent abstractions?

The answer lies in geographer James DeMeo’s Saharasia: The 4000 BCE Origins of Child Abuse, Sex Repression, Warfare and Social Violence in the Deserts of the Old World. (Yes, you’re right, this is not light bedtime reading.)

DeMeo meticulously documents how long-term drought in the equatorial belt that runs through the Sahara, the Middle East and central Asia turned these once fertile regions into deserts.

Desertification led to famine, which has a well-documented impact on the human psyche. DeMeo writes that, “The very old and young were abandoned to die. Brothers stole food from sisters, and husbands left wives and babies to fend for themselves. While the maternal-infant bond endured the longest, eventually mothers abandoned their weakened infants and children.”

The impact is catastrophic. “The malnourished child emotionally contracts and withdraws from its painful, unresponsive, and meagre environment”. What the child actually does is withdraw from the right brain into the left, creating hemispheric dominance. Along with it comes the normalisation of male dominance, rapacious conquest and sexual violence.

Nomadic warrior tribes swept away the egalitarian Neolithic era. In The Fall, psychology lecturer Steve Taylor writes that, “The main event in human history is a sudden, massive regression—a dramatic shift from harmony to chaos, from peace to war, from life-affirmation to gloom, or from sanity to madness.”

Humanity got stuck in its left hemisphere and constructed a left-brained society to reflect it. That psychological model—which is buried in our unconscious as well as our surrounding social structures—has repeated ever since through epigenetic inheritance.

The benefit of hemispheric dominance for humanity has been the invention of technology that’s allowed us to transcend simply surviving. The cost has been an emotionally toxic society that risks destroying the planet we depend upon.

A cost-benefit analysis of hemispheric dominance reveals that its emotional and environmental costs are no longer tenable. We must change. The question is how.

We must make the return journey from where we’ve been hiding in our left hemispheres these past six thousand years. Easier said than done.

The left hemisphere experiences everything to do with the right brain as painful and/or shameful. In Solve problems at their source – mental, emotional or sexual I describe how it’s necessary to solve right-brain issues by feeling into them. This is exactly the last thing a left-brain dominant person wants to do.

Philosopher P.D. Ouspensky describes the experience of balancing left- and right-brain thinking. He  wrote that, “higher emotions… as they grow, become more and more intellectualised… simultaneously with this the intellect becomes impregnated with emotionality and ceases to be ‘cold’.”

Although Roger W. Sperry went on to win the 1981 Nobel Prize in Physiology and Medicine for his split-brain research, Science has its reservations.

RationalWiki notes that hemispheric dominance “offers a case study in how a grain of truth in science can get blown out of proportion into a pseudoscientific industry.”

Studies of people who lost one of their brain lobes in accidents reveals that the brain has a powerful ability to rewire itself to use the remaining hemisphere to perform the functions typically handled by the missing lobe. This is known as neuroplasticity.

The ability to use a situation that only impacts a tiny fraction of the population—those who’ve lost half their brain—to dismiss a general model that accurately describes the behaviour of the remaining 99.whatever percent is a fine example of the left brain’s ability for abstract, either/or thinking to ignore common sense in pursuit of intellectual fastidiousness. It also shows that a useful lie is better than a useless truth.

G. I. Gurdjieff writes that, “in Western culture it is considered that a man may possess great knowledge, for example he may be an able scientist, make discoveries, advance science, and at the same time he may be, and has the right to be, a petty, egoistic, cavilling, mean, envious, vain, naive, and absent-minded man.”

Gurdjieff’s damning assessment perfectly illustrates how an excessive attachment to knowledge per se leads to views that are overly abstract and inapplicable to life.

The reality is that human behaviour generates billions of data points every day that support the model of hemispheric dominance. It’s both symptom and cause of our unsustainable patriarchal, anti-feminine world that’s existed for the last six millennia.

Photo by Zulmaury Saavedra on Unsplash