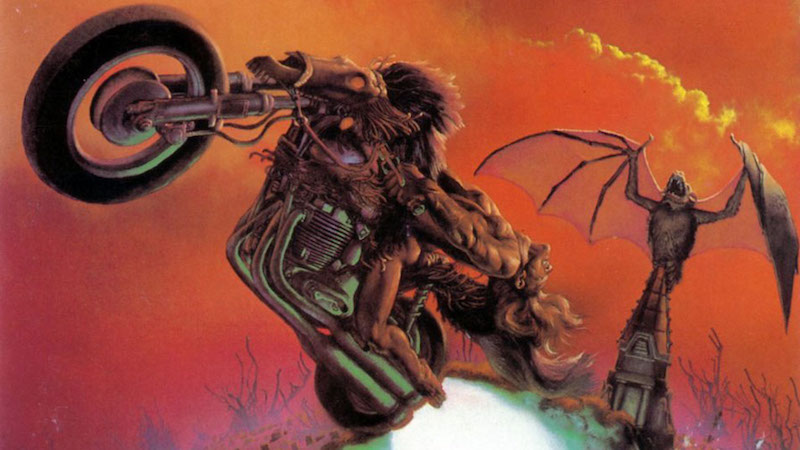 Some years ago I wrote how Pink Floyd’s 1979 epic double album The Wall was a complex 26-song cycle about patriarchy and its institutionalised sexual shame. I don’t know why it’s taken so long, but I have belatedly realised that Meatloaf’s 1977 debut album Bat out of Hell is exactly the same—only it covers this terrain in a mere 7 songs.

Bat Out of Hell opens with the monumental title track, 9 minutes and 48 seconds of Roy Bittan’s swirling piano and Todd Rundgren’s crashing guitar—with Marvin Lee Aday, better known as Meatloaf—wailing over the top. The title track introduces us to the dystopian world created by songwriter Jim Steinman. A city’s on fire, “a killer’s on the bloodshot streets” and the local council no longer cleans up the bodies. That’s verse one.

The second verse introduces not only the album’s nameless hero but also the value system of this violent society: purity. As Bat Out of Hell develops, it becomes apparent that this purity is fundamentally sexual. Steinman’s lyrics quickly depict this as a polarised world without any shades of grey. Everything is either “pure and good and right”—or not. This is a straight fight between light and darkness. Purity’s in the white corner, with uncontained sexual desire in the black boxers.

Sinner before the gates of heaven

That the album’s protagonist is in the latter corner is made explicit in the chorus: “When the day is done and the sun goes down / And the moonlight’s shining through / Then like a sinner before the gates of heaven / I’ll come crawling on back to you”. Our hero—let’s call him Bat—knows where he stands. He has hungers that this society most severely disapproves of. He can only come out at night where the glare of the sun—the light—cannot catch him.

Bat’s mode of transport is a “silver black phantom bike.” The motorcycle has long been the first choice of the dispossessed, the alienated, and the outsider—think James Dean and those 60s bikie gang flicks. The motorcycle is individual, noisy, fast and dangerous. It flaunts social conventions. Less so in these days of Harley-riding mid-level corporate execs with neatly manicured wild streaks, but when I was growing up in the 70s riding a motorcycle definitely carried a taint. Bat’s choice of a motorcycle reinforces the sense of him as a rebellious outsider.

Damned if I do

Midway through, Bat Out of Hell surges into a bridge. Bat sings, “I know that I’m damned if I never get out / And maybe I’m damned if I do.” It’s never made clear what constrains our hero, what—or who—he is up against. This echoes the entire body of Bruce Springsteen’s late 1970s work, where in song after song he rails against an invisible force destroying the lives of good working class families (see Point Blank – Springsteen and the shadow of shame).

Bat’s nemesis is nothing other than patriarchy—a black-and-white value system where female sexuality is a controlled. Anyone with a yin for socially illicit sex is a threat to the moral order.

Bat’s nemesis is nothing other than patriarchy—a black-and-white value system where female sexuality is a controlled. Anyone with a yin for socially illicit sex is a threat to the moral order. I have written about the historical reasons for this in A brief history of shame and Veils and vaginas – why do patriarchies control sex?.

2. You Took the Words Right Out of My Mouth (Hot Summer Night)

In the second track, Bat meets his equally nameless heroine (unlike Springsteen, who peppers his songs with a laundry list of character names). It is, of course, at night. The sexual nature of Bat’s interest in the girl is immediately obvious: “You were licking your lips / And your lipstick shining / I was dying just to ask for a taste.” Bat is not interested in her mind, her personality, or even—it turns out—her heart.

This, of course, presents a problem. For patriarchy, as it existed in the U.S. when Steinman and Aday grew up, required women to only grant sexual access in exchange for a wedding ring and lifelong love, fidelity and financial support. Bat can provide none of these—but, as luck would have it, the girl quite fancies him. Thus, in order to emotionally legitimise her sexual interest in him, she declares her love. There is no doubt that Bat intends to reciprocate. Of course he will. At some point… he just, well—the girl’s declaration spares Bat from revealing that his preoccupation with her is entirely physical.

Lyrically, Heaven Can Wait is the album’s most ambiguous song. Nonetheless, the first of Bat Out of Hell’s three big ballads fits perfectly into an anti-patriarchal narrative arc as an idealised imagining of the joy of sex.

In patriarchies, the pleasures of the flesh are traded for the imagined pleasures of an afterlife in heaven. (In some patriarchal religions, this afterlife specifically includes copious quantities of sexually willing women.) Bat senses the deal is a poor one—“I’ve got a taste of paradise / I’m never gonna let it slip away”—or is at least determined to try the real thing before settling for an ersatz afterlife.

4. All Revved Up with No Place to Go

Superficially, track four strengthens Bat’s place as an outsider unwelcomed by society. But the song’s real message is one of sexual frustration. After getting worked up imagining sex in track three, Bat is getting desperate: “In the middle of a steamy night / I’m tossing in my sleep / And in the middle of a red-eyed dream / I see you coming / Coming on to give it to me.” The tossing, the red eye (of the aroused penis) and the coming all suggest a masturbatory fantasy. Bat’s sexual urge is becoming irresistible.

By track five, Bat Out of Hell is building towards its climax. Bat is reunited with his girl, where his primary objective is lowering her knickers. Alas, she is more attuned to social conventions and is looking for emotional love as a prelude to a committed relationship with all its trappings.

The canny avoidance that Bat employed in You Took the Words Right Out of My Mouth no longer works. A long conversation ensues before the song’s opening couplet: “Baby we can talk all night / But that ain’t getting us nowhere”. Bat reveals his desperate desire for his girl—for her warmth, her intimacy—but admits he will never love her due to his own broken heart. The song ends with the same couplet with which it began, leaving the listener—along with Bat and his girl—in suspense.

6. Paradise by the Dashboard Light

Bat Out of Hell reaches its thematic climax in the three-part Paradise by the Dashboard Light, another epic track at 8:28 where Meatloaf’s bombastic vocals are fully matched by Ellen Foley, who finally gives the girl a voice.

Paradise by the Dashboard Light reinforces the notion that Heaven Can Wait is about sex (“I’ve got a taste of paradise”), as what is the paradise Bat sees in the dim glow of the dashboard light, other than the girl’s gleaming body?

To a galloping piano refrain, we learn that Bat has somehow surmounted his inability to profess his love to the girl in Two Out of Three ain’t Bad. Instead he has got her where he wants her: “Ain’t no doubt about it we were doubly blessed / ‘Cause we were barely seventeen and we were barely dressed.”

The song powers along as the moment of consummation approaches: “Our bodies are, oh, so close and tight / It never felt so good, it never felt so right / And we’re glowing like the metal on the edge of a knife.” There’s no question about what edge Bat at least is approaching here.

Paradise by the Dashboard Light suddenly veers into a repeated, frenetic chant of “We’re gonna go all the way tonight” that immediately signals a roadblock ahead. Tension builds with a clever baseball commentary voice-over. Suddenly, the girl—through Ellen Foley—brings proceedings to a halt. “Stop right there / I gotta know right now / Before we go any further / Do you love me? / Will you love me forever?”

This is a crucial moment in understanding the emotional mechanics of sexual relationships in a patriarchy. It isn’t enough for Bat to love her in this moment. In order to grant him sexual access, the girl requires him to love her forever. Only through a promise of eternal love can purity—the story’s key value, and patriarchy’s antidote to its conception of sex as fundamentally degrading—be maintained in the sullying presence of sex. If sex is an expression of romantic love, that’s acceptable. Sex for its own sake is just morally defiling lust.

The end of time

And so, to get his rocks off, Bat promises to love the girl forever—a fake promise because he has no real love for her. And then songwriter Jim Steinman—through Meatloaf—twists the knife. Having had what he wanted, Bat must now pay with a lifelong marriage that society considers morally proper. In fact, it’s loveless and soul-destroying. “So now I’m praying for the end of time / To hurry up and arrive / ‘Cause if I gotta spend another minute with you / I don’t think that I can really survive.”

What began as a natural, hormone fuelled teenage sexual crush has been twisted and destroyed—along with Bat and the girl—by the patriarchy’s implacable need to make every sex act a big deal that can only be atoned for by a lifelong romantic relationship, no matter how suited or unsuited the couple are. This is the price of purity.

7. For Crying Out Loud

The album’s closing ballad, another whopper at 8:45, concludes the song cycle of Bat and the girl by jumping to some point in their future when they have a child. For Crying Out Loud is a cry of pain from Bat after years living with the girl. His pain has been normalised and rationalised as a form of love. It’s the only way to survive the enormity of their mutual loss. Meatloaf’s pained vocal on this song—perhaps his finest effort on Bat Out of Hell—is a testament to Bat’s profound misery.

That Bat has failed to escape from patriarchy is quite clear. “I was kneeling in the chains of my master”. Once again we have the sense of some indefinable force that imprisons not only Bat and the girl, but the entirety of society. It’s the same mysterious force that permeates Springsteen’s most affecting work.

In For Crying Out Loud, the desire, the excitement, the joie de vivre of Bat’s feelings for the girl have all been lost. They may have been purely sexual but they were ecstatic, devotional, transformational… they were real. Instead Bat sees the girl only in terms of her ability to numb his pain.

For Crying Out Loud can be regarded as an ‘up’ ending song in that their earlier losses have been transmuted into a form of love. Alternately, it can be seen as a ‘down’ song. A joyful adolescent relationship, whose precise duration should not have been artificially determined by patriarchal social pressure, has ended up emotionally destroying Bat and the girl for the rest of their lives.

And this, still largely wrapped up in patriarchal morality, is what we consider normal.