The unconscious – realm of subjective truth 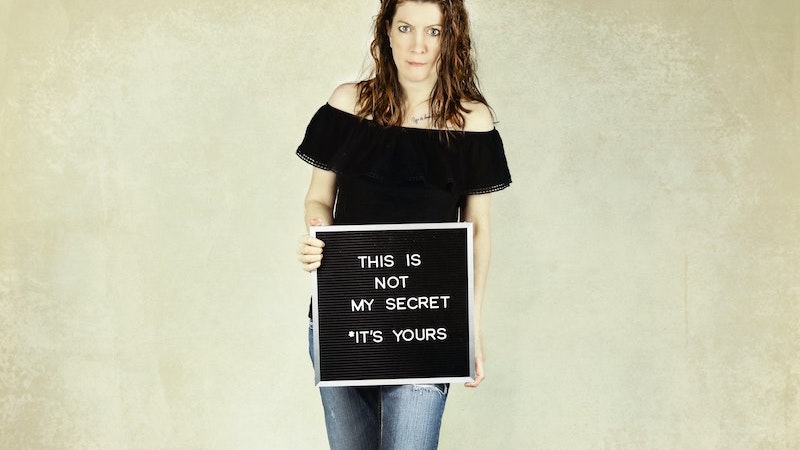 The human unconscious cannot be understood through objective truth and empirical evidence. This fluid domain is a world ruled by subjective truth.

The realm of the unconscious

In Debugging the Universe, Laura Knight-Jadczyk describes the unconscious as “the realm from where our world manifests, in which are found unfathomable depths of the rejected, the unacknowledged, the unrecognised, the unknown and undeveloped elements of our existence.”

Realm. Interesting choice of word. It designates a boundary—something seemingly hard and finite—yet it has an indefinite, vague, fluid feel to it. Perfect for the unconscious—because it is indefinite, vague, and fluid even while being “the realm from where our world manifests.”

Carl Jung stated that “until you make the unconscious conscious, it will direct your life and you will call it fate.”

“Direct your life.” “From where our world manifests.” That’s some realm.

The realm of subjective truth

But how do we accept the rejected, acknowledge the unacknowledged, recognise the unrecognised, and know the unknown? How do we develop the “undeveloped elements of our existence” when they’re indefinite, vague, and fluid?

We live in a world where objective proof and empirical evidence are generally considered the sole arbiters of truth. How do we navigate the watery depths of our unconscious?

By recognising that objective thinking is the wrong tool for disassembling the unconscious… and by stepping instead into the realm of subjective truth.

Does this mean abandoning logic and reason, observation and deduction? No. It means recognising the difference between subjective and objective truth. This requires us to observe and deduce differently.

What’s the difference between subjective and objective truth?

It’s easy to drop into the idiom of ‘objective versus subjective truth’. Versus is a combative word. If it’s used for purposes of comparison, as I’m doing here, that’s fine. But not in terms of competition.

With objective truth, each iteration of an experiment yields the same repeatable results. It doesn’t matter who performs the experiment, the outcome is the same.

With subjective truth, only the principles and processes are universal (i.e., repeatable). Each iteration of a process produces a unique result, fully in accordance with the principle, and fully grasped only by the subjective witness because the data points produced by the process correspond to their lived experience alone.

The spheres I’m talking about are the right and left hemispheres of the brain.

The supremacy of objective truth is due to hemispheric dominance, a phenomenon first proposed in 1960 by neurologist Roger W. Sperry. He won the 1981 Nobel Prize for this research. Hemispheric dominance has three core principles:

In other words, we mostly live in—and perceive the world from—the left hemisphere of our brains. That’s the intellectual, objective sphere.

Sperry’s work is now disputed, but what’s indisputable is that the phenomenon he observes exists. The data points of our left-brain dominant society are everywhere to be seen. The diagram below shows some of the differences between left- and right-brain processing. 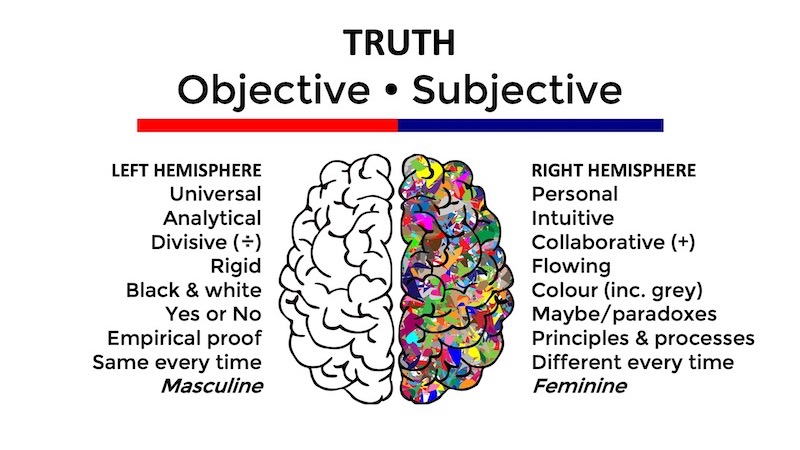 Note the final correlation of left-brain/masculine and right-brain/feminine. This ties in with our civilization’s basis on ancient patriarchal societies.

Personally, I disagree. Alphabets are a symptom of patriarchy, not its cause. Nonetheless, Shlain’s book provides fascinating insight into humanity’s shift from seemingly balanced left/right-brain thinking in neolithic times to our current unbalanced—and unsustainable—left-brain dominant paradigm. A paradigm that denies the validity of subjective truth, which has caused it to be both oppressed and repressed.

The truth shall set you free

Subjective truth may sound like an excuse for fantasy, delusion, and self-serving pseudo-analysis. Peering into the crystal ball of one’s unconscious, plucking out whatever massages our fragile ego. ‘Marking our own homework’.

Because when you uncover one of the subjective truths lurking in your unconscious, positive change happens. Trauma releases. Addictions loosen. Behaviours change. And the changes always happen in accordance with the principles and processes of subjective truth.

Those two data points—positive change that aligns with principles and processes—are the essential, must-have, non-negotiable signs of genuine personal truth.

With them, you will know it. You will feel it. You will see it. It’s unmistakeable because your life changes.

This is “the truth that sets you free” because it frees you from traumas, phobias, addictions, and other negative patterns of thought, feeling, and behaviour. You must first set free the need for objective truth—only then can you enter the realm of subjective truth.

Photo by Jen Theodore on Unsplash