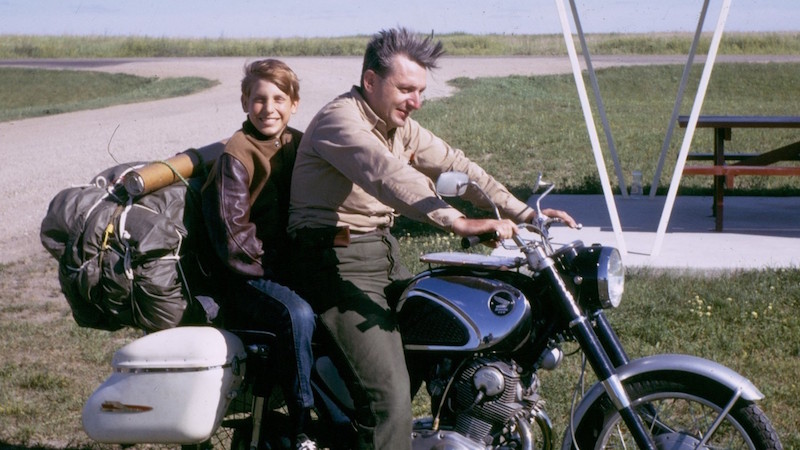 I’ve been reading Mark Richardson’s Zen and Now – On the Trail of Robert Pirsig and the Art of Motorcycle Maintenance. Richardson, a Canadian journalist and motorcyclist, was sufficiently inspired by Pirsig’s philosophical travelogue Zen and the Art of Motorcycle Maintenance to fuel up his own bike a few years ago and retrace Pirsig’s 1968 journey that inspired the book.

Zen and the Art is a thinly veiled autobiography that traces a 12-day bike ride from the twin cities of Minneapolis-St Paul through the Dakotas and Montana, over the mountains into Oregon, ending on the Pacific coast in San Francisco.

The participants are Pirsig and his 11-year-old son Chris, and their friends, the Sutherlands. Oh. And Phaedrus. A character in one of Plato’s dialogues, Phaedrus is Pirsig’s alter ego. Subtitled ‘An inquiry into values’, Zen and the Art alternates between descriptions of the bike ride west and Phaedrus’ emergence as a fragmented personality during Pirsig’s descent into schizophrenia.

Pirsig/Phaedrus grapples with a single question: What is Quality? Pirsig’s metaphor for this is the meticulous care he takes in maintaining the aged and underpowered 305cc Honda Superhawk he and Chris ride. This contrasts with the Sutherlands whose modern BMW is maintained by anodyne shop mechanics and disposed of after a year.

While Phaedrus was ultimately disposed of by electroshock therapy, Pirsig struggles with the first symptoms of Chris’ own mental illness while attempting to bond with his son. This is not light and entertaining reading. Yet, released in 1974, Zen and the Art was an immediate bestseller and rapidly acquired classic status.

Richardson’s Zen and Now documents changes to both the route and some of the characters Pirsig met on the way in the four decades since the original journey. It intersperses these with the cost of Pirsig’s personal story. His wife left him without a word and his other son broke off contact, describing him as an “ex-father.”

And, with tragic irony, Chris was later stabbed to death in a street fight outside the San Francisco Zen meditation centre. He was 23 years old.

I was about that age when I first read Zen and the Art of Motorcycle Maintenance. I too was a motorcyclist and I too was lost. Sensing that the book contained some great secret, I skimmed through the accounts of the bike ride and the tug-of-war between Pirsig and Chris. I was fascinated by Phaedrus’ descent into madness as he tried—and failed—to quantify Quality.

What happened to Pirsig? Why did the mental wheels come off?

With Pirsig, it’s easy to reach for the cliché of the tortured genius. He had an IQ of 170. He embraced Eastern metaphysics during a stint in Korea with the US Army. Throw in a domineering and obsessive personality, and he never fitted in—not in the academic milieu of Bozeman, Montana, and later Chicago, or in the world of technical manual writing he subsequently inhabited. With all that intelligence, couldn’t he see where his life was leading?

The answer is no. Robert Pirsig was a classic case of left-brain hemispheric dominance (lateralization of brain function) gone too far. For all his intelligence, he couldn’t see that he needed more tools in his toolkit than just intelligence—that excessive intelligence itself might be part of the problem, not the solution. Quality resides in the right brain. It’s a knowing, not a fact. Phaedrus tried to take a scalpel to Quality, but it’s indivisible—and it shattered him.

For all his intelligence, Pirsig couldn’t see that he needed more tools in his toolkit than just intelligence—that excessive intelligence itself might be part of the problem, not the solution.

And with excessive intelligence comes emotional alienation—both from the self and from others. That alienation manifested in both Pirsig’s schizophrenia and the catalogue of failed relationships that Richardson so tragically documents. It’s no coincidence that academia, home to the most intelligent, is also home to the highest levels of occupational mental illness.

What stops us seeing across the corpus callosum—the nerve tract that connects our brain lobes—into the right hemisphere of our minds where Quality and our other intuitive functions such as emotional balance and connectedness reside?

It can be described in two words: unconscious shame.

We live in a society that’s traditionally shamed our emotional and sexual selves—the parts of ourselves we need to connect with and healthily express to have true wellbeing. When we truly feel well, we naturally reflect that wellness into everything we do.

Phaedrus—or should I say Pirsig?—tried to externalise Quality, to turn it into a checklist that could be followed to ensure its presence. He tried to make Quality something even the anodyne mechanics at the Sutherlands’ BMW shop could produce. He failed for the simple reason that Quality arises naturally from wellbeing, from the Zen harmony of interconnected life.

Pirsig knew that the answer to his riddle lay in his interest in Zen. The leap he couldn’t make was the leap from thinking to feeling. Quality can’t be thought, it can only be felt. Shame prevented him from doing that.

Zen and the Art of Motorcycle Maintenance was the first book I read that delved beneath the surface of ordinary life; that even dared to ask unasked questions, let alone answer them. As such it remains a major landmark in my life. It’s the moment I started penetrating the mysteries I’ve tried to unravel on this site.

As I read Richardson’s memoir and plan my own pilgrimage along the route of the Zen riders (as Richardson calls them), I recall that I too started on the same path as Pirsig: the path of maximum intelligence. I tried to do the smartest job I could find, which in my case was mainframe computer systems programming.

But life deflected me, sent me on another path. The Zen riders detoured on their way to Bozeman to make the forbidding ride over the Beartooth Pass. I rode over my own metaphorical Beartooth Pass. A dark, plunging path into the world of unconscious shame, away from the scintillating intelligence Pirsig valued so much. Nevertheless, my gratitude to Robert Pirsig—who passed away in 2017—remains immense.