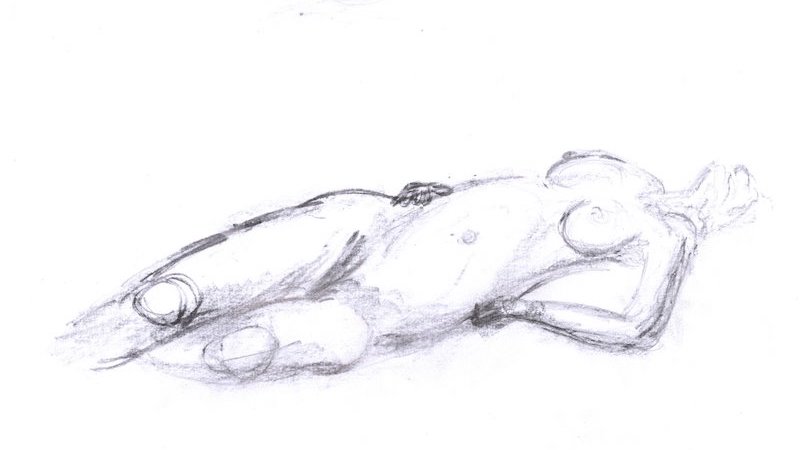 I recently started life modelling—posing naked for artists to draw the human body. Even in life drawing, as in everywhere in our patriarchy-based society, there is shame. As a keen observer and reporter of sexual shame I was interested to see how it played out in this arena where nudity was de rigeur.

So far I have identified three kinds of life drawers:

Avoiders have sexual shame that is successfully repressed. I saw a fantastic drawing of myself—except that I had no genitals, just a dark smudge between the legs. This is the land of 4B pencils and dark crayons, shadows and nameless (well, nameless beyond being sexual) fears.

Avoiders are very interested in art and will discuss it at great length, though without ever mentioning the elephant in the room—the exposed genitals.

Amplifiers have sexual shame that is breaking through their repressive defences without their conscious awareness. They have a particular fascination with the genitals they cannot name or admit, and are somewhat embarrassed by.

Here I saw a poorly drawn outline of my body, a lack of and disinterest in basic drawing skills, and a detailed rendition of my penis. This is the realm of avoided gazes and embarrassment, vaguely sensed fetishes and semi-latent homoerotic desires.

If left to their own devices they might draw a close-up of the genitals and nothing else, for indulging their sexual fascination—i.e. taking advantage of a socially legitimate outlet for nudity—is the unspoken goal of their attendance.

The behaviour of the artist mimics their art in revealing their genital fascination. Turn up late, swathed in clothes and headphones, engage with no one, leave early. The amplifier does not want his sexual preoccupations (and his shame of them) to be recognised or questioned.

Acceptors are comfortable with the human body in all its vagaries, its structure (apparently mine is good), its nooks and crannies (apparently I have lots) and its unavoidable sexuality. Here you will find an open, life-like depiction of the genitals free of the avoidance or childish fixation of the other sub groups.

Light and shade are distributed in accordance with nature’s laws, unlike the amplifiers (too much light) and avoiders (too much shade).

Light and shade are distributed in accordance with nature’s laws, unlike the amplifiers (too much light) and avoiders (too much shade)

The artists’ behaviour is similarly open and fresh. They probably won’t engage in a long discussion about the intricacies of drawing genitalia. But they will unashamedly draw the model’s body in all its glory. And, equally unashamedly, they’ll let others see the fruits of their labours.

Wherever there is humanity there is sexual shame squirming out sideways in a society desperate to avoid the topic. I for one will not avoid it. Bring on the next life drawing session.