Michael H Hallett > Blog > Arts > If war is to end, so must war stories 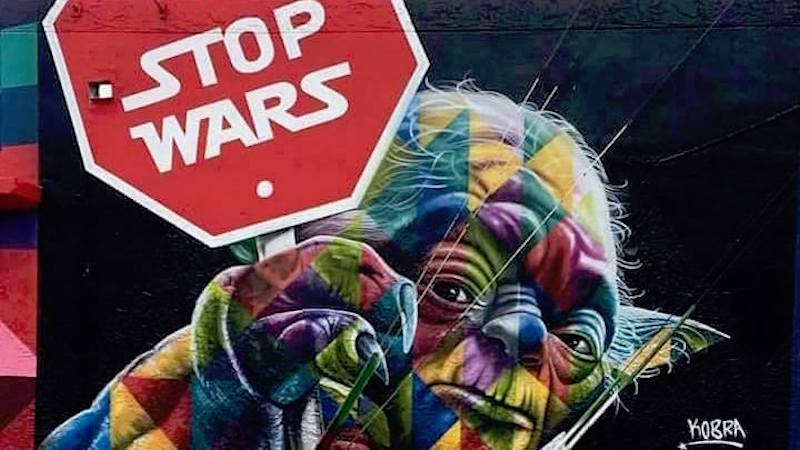 Ca-ching! Multiplex cash registers around the world are still sizzling hot from the record-breaking box office performance of The Force Awakens, episode seven of the long-running Star Wars saga.

Inside darkened theatres, a whole new generation of children—the film is rated PG-13 in the US—thrills to J.J. Abrams’ revitalising take on the tired tropes of George Lucas’ science fiction world. One thing is constant, not just in Disney’s recently-acquired franchise but in most of the films now peddled to the young adult audience: a winner-takes-all fight between the forces of Ultimate Good and those of Irremediable Evil.

The Motion Picture Association of America (MPAA) handed The Force Awakens a PG-13 rating on the basis of its “sci-fi action violence”. They urged parents to be cautious of taking pre-teens to the film. However PG-13 does not actually restrict children of any age from going.

Judging by the box office, it doesn’t appear that many parents listened. One cinema website described the MPAA, whose job is to protect children from psychologically damaging material, as “buzzkills”.

Outside the cinema, a veteran with a cardboard sign begs with a used Starbucks cup, its bottom ringed with dried coffee. Exhausted by the high-impact visuals, their eardrums still ringing from the over-loud surround sound, and having spent their pocket money on grossly oversized popcorn servings, the punters have nothing left to give and pass by with a quick glance in the opposite direction.

He is just the visible face of the over 60,000 homeless veterans in the United States. Many of these homeless veterans, 8% of whom are female, suffer from post-traumatic stress disorder (PTSD). Mental and physical disabilities, substance abuse, family breakdowns, joblessness and poverty are also endemic.

At least the homeless veterans have some visibility. Others are simply disappearing.

A 2012 study by the Department of Veterans Affairs suggests that veterans are committing suicide at the rate of 22 per day. That’s two per screening of The Force Awakens. Others have argued that the real figure is higher or lower; this merely obscures the uncontested truth that the suicide rate among veterans is about twice that of the general population.

So far, little has been done to help veterans who tend to suicidal ideation or who have fallen into homelessness. In 2009 call centres were established to help homeless veterans. However, a 2014 study showed that nearly 50% of those who contacted these centres received no support.

In addition to helping today’s veterans we must stop the production line of tomorrow’s veterans.

While some wars may be worth fighting, the dismal outcomes of campaigns in Afghanistan and Iraq show that US politicians and military leaders are incapable of identifying them. America—and the world at large—would have been much better served by American inaction in the Middle East and Central Asia.

This requires a different mind-set from that promoted by Star Wars and other violent films. For if war is to end, so must war stories.

Can we not see the connection between the stories we tell our children and the PTSD-ravaged veterans that stagger back from our ill-advised wars?

Can we not see the connection between the stories we tell our children and the PTSD-ravaged veterans that stagger back from our ill-advised wars?