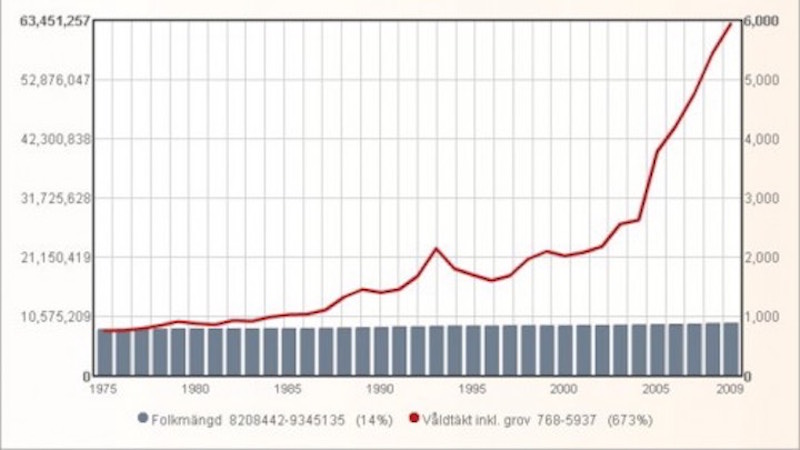 Once upon a time there was a far-away land called Sweden, where circa 1998 there were 2,500 prostitutes gainfully employed keeping the Big Bad Wolf in a post-coital stupor. To reduce sex trafficking, a law was passed criminalising the Big Bad Wolf for buying sex.

A dozen years later the number of prostitutes in this far-away land is reported to be around 1,000. The ‘Swedish model’ is hailed as such a success that various MPs, EU officials and women’s groups now propose its implementation in the UK.

However, there is a serious possibility that this success may be nothing more than a fable from the Grimm Brothers.

For at the same time that the number of prostitutes in Sweden has been plunging, another statistic has risen at an even greater rate: the number of reported rapes. From a 1998 figure of approximately 20 incidents per 100,000 population — already high by European standards — the rate rose to 63.2 in 2010, the second-highest in the world behind South Africa.

According to Klara Selin, a researcher at Sweden’s National Council for Crime Prevention, some of the increase is explained by changing societal attitudes. However, she didn’t deny that the actual number of rapes had increased.

Another attributed cause for this appalling statistic is Sweden’s broader legal definition of rape. However, a 2009 EU-funded study of Swedish rape statistics arrived at a figure of 46 per 100,000. This was attributed to a ‘rape culture’ associated with Sweden’s high-alcohol lifestyle.

None of these researchers have noted the correlation between Sweden’s skyrocketing rape numbers and the criminalisation of buying sex.

None of these researchers have noted the correlation between Sweden’s skyrocketing rape numbers and the criminalisation of buying sex. But it doesn’t require the vision of the Grimm Brothers to imagine rest of the story.

The inebriated Big Bad Wolf, who previously turned to prostitutes for sex, now resorts to more violent methods. By criminalising the buying of sex Sweden is merely dallying with symptoms. The real issue is the underlying, alcohol-fuelled ‘rape culture’, which is itself an indication of entrenched sexual shame.

Swedish prostitution laws seem to have come at the cost of a quantum leap in sexual violence. A more nuanced approach must be developed if this story is to have a happy ending.