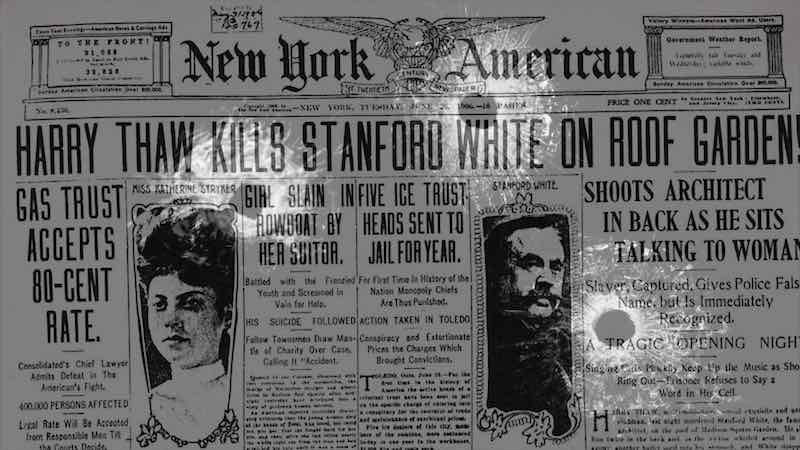 The media dubbed it—perhaps for the first time—the ‘crime of the century’. On the night of 25 June 1906, Harry K. Thaw shot architect Stanford White at point-blank range in the rooftop restaurant of New York’s Madison Square Gardens.

Stanford White was a major public figure. New York was in its Gilded Age of railroad tycoons, mining magnates and shipping empires. America was finding its feet as a global power—and constructing civic buildings to match.

Stanford, a partner in the firm of McKim, Mead and White, was at the forefront of this architectural revolution. His designs included the Washington Square Arch, churches, banks, libraries, mansions and clubs for the uber-rich society emerging at this time. Ironically, Stanford even redeveloped the Madison Square Gardens complex where he was murdered.

Birth of the ‘it’ girl

Thaw, the mentally unstable son of a railroad baron, was enraged with Stanford over the latter’s prior relationship with Thaw’s wife, actress Evelyn Nesbit. The trial splashed Nesbit—and her involvement in Stanford White’s lurid personal life—onto the front page of every newspaper. According to Nesbit’s biographer Paula Uruburu, Evelyn was the first ‘it’ girl and ushered in “a national obsession with youth, beauty, celebrity, and sex.” Thaw’s trials—there were two of them—revealed that Stanford White was, in today’s terms, a sex addict. He pursued dozens of vulnerable young women—such as chorus line girls from the Madison Square Gardens, where he first saw Nesbit—lavishing gifts and arranging social advancement for them in return for physical favours they were ill equipped to withhold.

But it wasn’t only young women that Stanford consumed.

Stanford was a voracious collector of anything rare, beautiful, ancient or costly. He made whirlwind tours of Europe, snapping up artworks—including the entire ceiling of a Venetian palazzo—for irresistible prices before on-selling them to his wealthy friends at hyper-inflated values.

His purchases showed no restraint. On one occasion Stanford took a liking to an Italian village fountain. Someone got paid off. The carabinieri turned a blind eye. The entire fountain was uprooted and shipped back to America. Something used by hundreds of people on a daily basis became a mere adornment in a tycoon’s summerhouse, unnoticed among a jumble of other dazzling artefacts.

The architect of desire

In fact, Stanford was voracious in every aspect of his life. He had a huge capacity for work. Then it was off to be the life of the party—Stanford had to be the centre of attention. Late in the evening he would dash back into the office, in his dinner suit, to sketch out his latest ideas. Then back to the party and on to a sex tryst with whoever was the latest on his throne. By this time it was too late for sleep. Stanford just drank more champagne and repeated the cycle.

The red-haired Stanford was tall and flamboyant, a whirlwind of intense energy. He took charge of others’ problems and solved them with irresistible force. Stanford could be hugely generous—all the while charging his best friends extortionate prices for European curios. He even designed a house that perfectly fitted the Venetian ceiling, which his client sleepwalked into buying. The many sides of Stanford White are revealed in his great-granddaughter Suzannah Lessard’s masterful account, The Architect of Desire.

But beneath all this lurid, unbridled consumption lies something deeper. The America that emerged from the Gilded Age and went on to global dominance over the course of the two world wars—and onwards into decadence and its current phase of decay—is the quintessential patriarchal society. Excess is the undercurrent of the American Dream: more, bigger, better—an endless bubble of acquisition, expansion and consumption.

I have written elsewhere how the fundamental emotional dynamic of patriarchal societies—and hence those who live in them—is a fear of shortage that manifests as a quest for surplus. When keeping a reasonable store—“something in the cupboard for a rainy day”—balloons into senseless hoarding or consumption, surplus turns to excess.

With Stanford White, homo patriarchus—Patriarchal Man—reaches his apogee. Everything about Stanford is excessive: his talent, his generosity, his exuberance, his appetite, his sex drive.

Everything about Stanford is excessive: his talent, his generosity, his exuberance, his appetite, his sex drive. Stanford filled his world with brilliance—from the architectural masterpieces of the Washington Square Arch, New York’s Villard Houses and the Boston Public Library to his personal wittiness, generosity and joie de vivre.

Yet everything that Stanford touched he also poisoned. His remodelling of the University of Virginia was so despised that, as part of the 1976 Bicentennial celebrations, it was restored to Thomas Jefferson’s original design. Despite his huge income, by the time of his death he was three-quarters of a million dollars in debt—a huge sum in contemporary terms.

Not surprisingly, given his lifestyle, Stanford increasingly suffered from health issues. The coroner who examined his body opined that, even if Stanford hadn’t been murdered, he would have died of liver failure within a year. And Stanford’s libertine lifestyle had long-term negative consequences for his extended family, creating a shame-filled silence where sexual abuse propagated from generation to generation, as Suzannah Lessard achingly and painstakingly documents.

As it is with Stanford, so it is with patriarchy. The microcosm reflects the macrocosm and vice-versa. For all their technical brilliance, patriarchies are fundamentally toxic societies.

It’s nice to think we’re moving away from the culture of excess that Stanford White so destructively embodied. But if we had anywhere near his talent, his energy, his appetites, would we have behaved any differently?