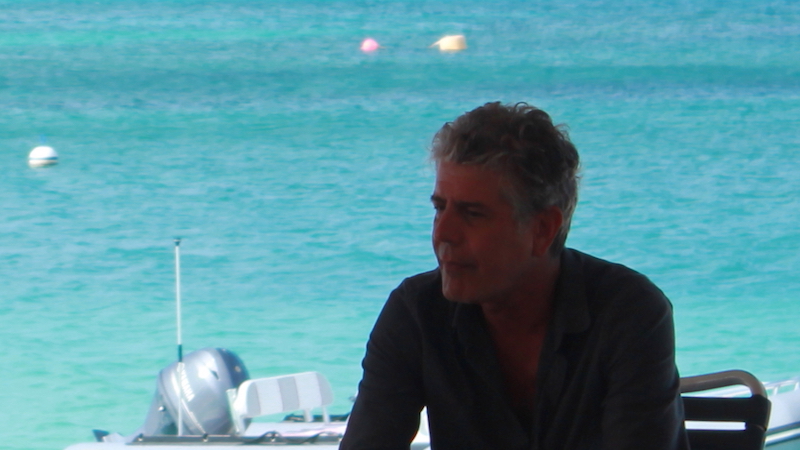 On Friday 8 June 2018 the foodie world reeled to the news that celebrity food author and TV presenter Anthony Bourdain, 61, had committed suicide.

I never met Bourdain. I never even read his acclaimed book, Kitchen Confidential, though I meant to. But his TV shows like No Reservations and Parts Unknown were go-to choices for long haul in-flight entertainment. And I saw him once, at the 2012 Cayman Cookout food festival right on the water’s edge at Seven Mile Beach, Grand Cayman, outside the Ritz-Carlton. I had a press pass (won in a food magazine competition, seeing as you ask) and with it a ringside seat.

The event was a Q&A double-act with Bourdain and Eric Ripert, head chef at the Ritz. The audience tossed Ripert and Bourdain provocative questions. Ripert played ‘good cop’ and gave reasonably polite ripostes (he is French, after all). Bourdain played the opposite part, tearing gleefully into whatever foodie-related morsel he’d been handed. It was like feeding time at the zoo.

Topics ranged from whether Bourdain would eat a Bluefin tuna if there was only one left surviving (answer: yes, as long as it wasn’t pregnant), what he thought of Gordon Ramsey’s U.S. show Hell’s Kitchen (“a circus of cruelty, and this is me talking”), and why the Food Network TV channel made him angry.

Bourdain’s reply to this last question was the most telling. He savaged the show’s dishonesty, admitting that it made him “cranky” when they presented spaghetti carbonara, a 4-ingredient, 20-minute dish that’s “so simple to cook the way most Italian grandmothers do” as a 12-ingredient, 45-minute culinary challenge.

This led to a tirade against various forms of fast food, all delivered with his trademark humour—and all fuelled by his anger. Towards the end Bourdain seemed to lose focus, as if he was speaking to himself more than his audience: “I wish I wasn’t [angry]; I wish I could just live and let live, but, but…”

“But, but…” The audience laughed and clapped. Six years on, Anthony Bourdain finished the sentence. I should have seen it coming. The signs were there; I was just too busy laughing at his savagely dark humour to notice.

Savagery, in whatever form it takes, requires an underlying judgment. Not judgment, as in drawing sensible conclusions, but as in a sharp delineation between good and bad, OK and not OK, the exquisiteness of simple food well prepared against the abomination of convenience crap: “It offends me when… you see somebody squirt some cheese out of a can onto a fucking biscuit and that’s, that’s food. It’s NOT food.” Bourdain recognises this judgment in his slightly off-key phrase, “I wish I could just live and let live.”

The thing with judgment is that you can only judge others in direct proportion to your ability to judge yourself. Bourdain’s ability to dissect others with trenchant gallows humour—the phrase seems darkly apposite—both conceals and reveals that he must have held similarly scathing views about himself.

Eventually, that self-judgment seems to have gotten the better of Bourdain. As fate would have it, Eric Ripert was travelling with Bourdain and became worried when his friend missed dinner and breakfast. Ripert told Bourdain’s mother that “Tony had been in a dark mood these past couple of days.”

The world lost a great man. His death saddens me out of all proportion to his impact on my life. I doubt that I shall read his book now. I would see too easily through the savage humour to the tragic misery that underlies it.