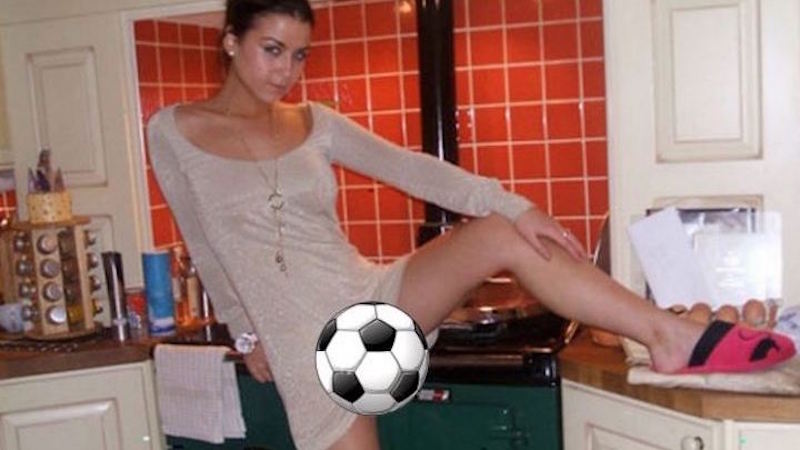 On 5 September 2010, as the England football team prepared to face Switzerland in Basle for a vital 2012 European Championship qualifier, revelations emerged in the Sunday press regarding an alleged liaison between the team’s star player, Wayne Rooney, and a prostitute called Jennifer Thompson.

The Mirror struck a relatively neutral tone and focused on Rooney while revealing only a few details of the reputed £1,000-a-night hooker. The Mail, however, quite rightly sensed that the real star was Thompson. First, they raised her callout rate to £1,200. Then, using her own MySpace moniker of ‘Juci Jeni’ (or ‘Juicy Jeni’, the article uses both), the tabloid struck a faux-modesty pose while serving up titillating details of the woman at the centre of the latest Premier League sex scandal.

An image showed Thompson in a skimpy dress with one foot up on a kitchen worktop. A clip-art football was pasted over the unguarded goalmouth between her legs. ‘We have covered her modesty’ trumpeted the caption, staving off a stampede for Thompson’s services that would have single-handedly ended the recession. Yet the original image, easily found on the internet (1), shows that Thompson’s dress already covered the said modesty.

Two days later, just hours before the Switzerland match, the Mail produced an article revealing that the £1,200-a-night hooker who had snared the nation’s top footballer was once a churchgoing public schoolgirl. The article thoughtfully provided images showing the Jekyll-and-Hyde transformation of a uniformed and straight-laced schoolgirl into ‘Juicy Jeni’, her wild-child alter ego.

Further on, another caption informed that ‘Jennifer’s parents Hamish and Danuta, who are on holiday in Portugal, are said to have disowned her’. Presumably the lack of an image of Hamish and Danuta disowning their daughter forced the Mail to show a bikini-clad Jennifer draped over a sun bed, her limbs at carefully flung angles. As well as more images there were more numbers. Thompson attended the £1,555-a-term Lord’s Independent School. Defying national house price trends, the value of her parents’ home in a “leafy suburb of Bolton” sky-rocketed from £300,000 in the Sunday Mirror to £400,000 in Tuesday’s Mail.

The article fizzed with salacious snippets of her champagne-fuelled lifestyle. Lurid details emerged of how Thompson, known to her friends as ‘Premiership Jen’, targeted top-flight footballers with the same ruthless intelligence that Sir Alex Ferguson applies to winning the Premier League. Unlike Ferguson, who relies on the abilities of Rooney and others, Jennifer Thompson’s ball-handling skills are in an altogether different league. Messi? Probably.

The collective ennui remains. The sense that Thompson has committed some form of moral crime beyond selling sex lingers, though the exact charge against her is unclear.

On the surface, Thompson represents a systemic failure. Her parents did the right things. The money was spent, the recipe followed. The tabloid tidbits suggest many things but there is not the slightest hint of abuse. Jennifer Thompson should have turned out all right; instead she became a prostitute. She is doubtless not the first ex-public schoolgirl to do so, though any others are Football League journey(wo)men compared with Premiership Jen.

Instead Thompson burst into the public arena through her association with Rooney. Worse yet, she is not only unrepentant but living in a 24-hour-party bubble, swiping her body over male admirers like a limitless credit card. Steel helmets and jackboots are out; black bin-liner off-cuts are in: she’s a 21st century sexual stormtrooper coming to a Premier League player near you.

In reality, Thompson’s antics are of little concern except to overpaid footballers. So what is it about her that causes offence? The answer lies in our unconscious stereotype of the prostituted woman. The traditional view of such women centres on their vulnerability. One way or another they have been coerced: physically, emotionally or financially.

According to the anti-prostitution camp, no woman who has a decent – or even half-decent – alternative would ever willingly prostitute herself. Those who do are either drug addicts financing their addictions, emotionally weak women manipulated into selling themselves by unscrupulous pimps, or financially stressed women for whom prostitution represents a quick means of converting natural assets into liquid ones.

In all cases, so the argument runs, not only are these women significantly disempowered but they receive a mere fraction of the revenue their sweaty efforts generate.

At a stroke, Jennifer Thompson dismisses all these arguments. Clearly she is not subject to physical coercion. Nor was she manipulated by a pimp. Thompson’s escort agency allegedly fired her after she dealt directly with Rooney and pocketed the entire £1,200 fee. Financially stressed? Of course she is – she needs to pay for the next six months on the Costa del Sol.

Nonetheless, there are grounds for arguing that Thompson is vulnerable. She is reputed to have easy access to hard drugs. There are suggestions of absences by her parents. A failure to readapt to British life after an upbringing in Qatar, which is a long way from Bolton. Perhaps her hedonistic lifestyle is a reaction to being a third-culture kid (TCK), a child who has integrated significant elements of a foreign culture only, as some TCKs do, to become a stranger in their own land. Result: booze, drugs and sex.

In fact, the sex looks like the healthiest aspect of Thompson’s lifestyle. At least while she was shagging Rooney she was too busy to be sniffing cocaine. And rather than Thompson swigging champagne, Rooney was perhaps pouring it over her breasts à la Denise Richards in Wild Things. Or not: according to Juicy Jeni, Rooney’s bedroom performances had more in common with his insipid plodding at the 2010 World Cup than his scintillating efforts in Basle, where he scored the opening goal in England’s 3-1 victory.

But this is tangential. What is central is that Thompson had other choices, good choices. There is money in the family. There is (or was) support. She could have studied, opened a small business or shifted flotsam via eBay. Instead she knew what she wanted and understood the path to achieving it. Jennifer Thompson causes outrage not because she had a public school education, but because that education afforded her socially acceptable choices – and she rejected them.

Ultimately, Thompson’s real crime is to have shattered the trope that no woman willingly prostitutes herself. This discomforts those fundamentally opposed to prostitution, generating a niggling unease which surfaces as moral outrage. Prostitutes who fit the traditional bill may still be in the majority, but the willing prostitute – for so long derided as a sordid male fantasy – can no longer be dismissed. Before Rooney’s indiscretion, those who argued that there are women who genuinely choose to sell sex were forced onto the defensive by a lack of examples. They needed a poster girl, a rallying cry, an iconic moment. Now they have it: a Bolton public schoolgirl turned £1,200-a-night hooker. Like it or not, Jennifer Thompson has changed the parameters of Britain’s discourse on prostitution.

In this changed landscape there are opportunities. By convincingly showing that not all prostitutes conform to the stereotype, Thompson helps to clear the ‘fog of sex’ which clouds the debate. The outrage directed at Thompson is useless. The urgent task is to help prostitutes genuinely in need of protection, whether from traffickers or from themselves. Studies show that the majority of the ‘punters’ who purchase sex are not gangsters or criminals but ordinary men; it is their desire for anonymity that drives them into the lairs of trafficked and emotionally vulnerable women.

Removing the stigma of prostitution from women like Jennifer Thompson creates a socially legitimate avenue for trading sex. This allows the demand to shift from vulnerable and exploited women to those who sell sex willingly and are amply rewarded. If Jennifer Thompson contributes to such a shift in awareness she will have done more for society than any football victory could ever achieve.