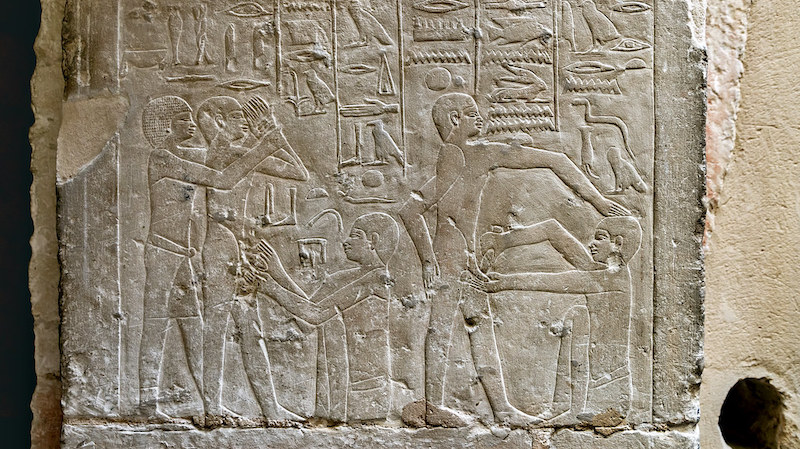 In What is ancestral trauma? I describe the key psychological wounds that humanity suffered as a result of the drought, desertification and famine that gave rise to patriarchy. Here I want to focus on the third of these wounds: humanity’s core sexual wound.

Humanity incurred a core sexual wound as a result of the drought, desertification and famine that created patriarchy.

Desertification in the Middle East around 6000-4000 BC caused a fundamental shift in the human psyche. Famine changed people from peaceful to warlike to compete for dwindling food sources. These societies also became violently anti-sexual. There seem to be several reasons for this.

I’ve described the impact of aggression on the Ik people of east Africa. As they struggled for survival, their emotional bonds dissolved. They also lost all sense of sex being pleasurable. It became solely a survival tool. This same shift seems to have happened during the rise of patriarchy. The evidence for this lies in thousands of years of denial, subjugation and repression of sexuality, as well as all sexual excesses.

Infants were subject to early weaning. Deprived of both the nourishing colostrum and the sexually pleasurable sensation of breastfeeding, infants—particularly males—developed a capacity for violence and sexual rage. This conferred an evolutionary advantage in the fight for survival.

These new warrior societies repudiated the practices of the peaceful, often goddess-worshipping cultures they supplanted. The entire Old Testament is a long struggle by an emerging patriarchy to stamp out the practices of its predecessors—particularly sexual practices. “You worship other gods by having sex on hilltops or in the shade of large trees.” (Jeremiah 2:20)

There was a more practical consideration, too. As I wrote in A brief history of shame, these warrior societies valued the male capacity for violence above all else. The women of the elite had to be controlled to ensure they only had sex with the ruling males to protect the victorious bloodline.

Strict sexual rules developed for both men and women. The early books of the Bible are littered with examples. Punishments were severe. Sexual offences were deeply shameful for the victim, the victimizer, and their families.

This rejection and shaming of the entire sexual aspect of humanity caused a split in the human psyche. Michael Picucci, PhD, calls this the ‘sexual-spiritual split’.

In The Journey Toward Complete Recovery he describes it as “a deep psychic schism within almost everyone in our culture” which teaches that, “God, love and family are good while sex is dirty, bad and perverse.”

This is the core sexual wound at the heart of humanity.

At some point during the rise of patriarchy the sex-negative sentiments behind this core sexual wound manifested as genital mutilation practices. James DeMeo writes in Saharasia that, “Female genital mutilations are generally harsher, more painful, and more life-threatening than those performed upon the male.”

The intent, with both genders, was to inflict sexual trauma. Moses Maimonides, a physician and rabbi in Cairo (c. 1175), wrote: “The true purpose of circumcision was to give the sexual organ that kind of physical pain as… to lessen the power of passion.”

This core sexual trauma became embedded in the collective unconscious, passed from one generation to the next. It exists regardless of whether a male has been circumcised or not—that’s only its external appearance. It continues to manifest in the on-going sexual negativity widely seen in the world today. Even for those with a sex-positive outlook it exists as an obstacle to complete intimacy.

For men, healing this core wound is part of the journey from the genitals to the heart that brings unruly male sexuality into a place of holistic self-regulation.

Image: Mastaba of Ankhmahor, Saqqara, Egypt (c. 2300 BC) by kairoinfo4u on Flickr