Ancestral trauma #6 – Fear of the desert and desertification 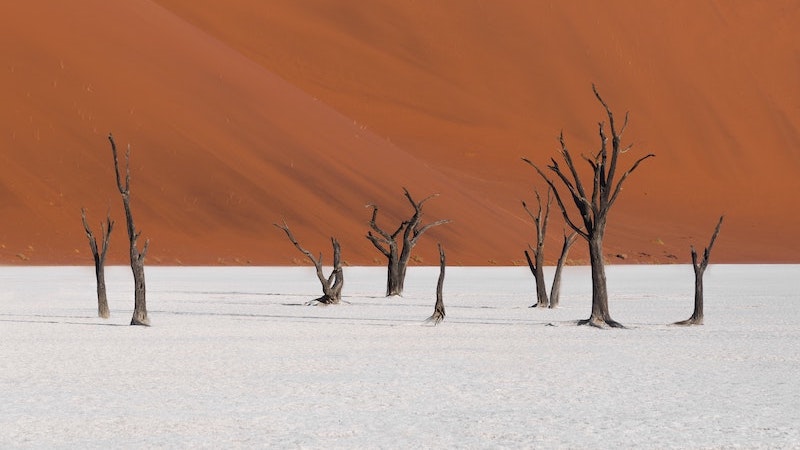 As soon as the Toyota Landcruiser’s heavy tyres crunched onto the gravel road, I felt it in the pit of my stomach. Fear. It was only a few miles off-road to the Wadi al Muaydin in Oman—gravel, not even proper desert. Yet it was there. An unmistakeable fear of the desert, despite never having spent a single day of my life in the world’s most arid terrain.

In What is ancestral trauma? I’ve described a number of deeply rooted traumas that appear to be common to all humanity. They originated in the deep past when patriarchy emerged and are still with us several thousand years later.

Why? Because no one has ever cleared them. They’ve simply been passed down through the indifferent mechanism of epigenetic inheritance.

“As the great belt of desert landscape called Saharasia appeared, so too appeared the emotional desert of the human social landscape.”

Fear of the desert

Naturally, centuries of drought, desertification, and famine heavily impacted the human psyche. The real enemy wasn’t whoever you were fighting for control of a food or water source, like a wadi. It was the ever-spreading desert you could do nothing about.

The Old Testament is littered with allusions to the fear our ancient forbears had about the ever-expanding desert.

“Your land has become a scorching desert of salt and sulphur, where nothing is planted, nothing sprouts, and nothing grows.” (Deuteronomy 29:22)

“Vineyards near Heshbon and Sibmah have turned brown.” (Isiah 16:8)

“God kept crops from growing until food was scarce everywhere in the land.” (Psalms 105:16)

“I said to the Lord, ‘None of us can understand why the land has become like an uncrossable desert.’”(Jeremiah 9:12)

“The Lord will make the sky overhead seem like a bronze roof that keeps out the rain, and the ground under your feet will become as hard as iron. Your crops will be scorched by the hot east wind or ruined by mildew. He will send dust and sandstorms instead of rain, and you will be wiped out.”

Wiped out. There it is—the fear of the desert and of desertification.

DeMeo’s extensive research reveals how desertification created the world’s first conquering tribes, who went on to spread the patriarchal paradigm to the four corners of the globe.

Part of what they spread were their ancestral traumas, even to peoples who had never even seen a desert. It was in the DNA that spread through genetic downlines over centuries.

And there it was, waiting to be triggered, when I turned off the tarmac onto the gravel road to the Wadi al Muaydin. Not the deepest trauma in our psyches, or the most affecting—yet nonetheless a component of the ancestral DNA at the core of all our psyches.

A few days later I drove into the desert proper at Wahiba Sands. The fear returned, more virulently, as our 4-wheel-drive bucked over the desert dunes. The fear of getting lost, of running out of water. The fear of madness in the burning days and freezing nights. Of making a mistake and paying with one’s life. All these reared their ugly heads.

All I can say is, when you go to the desert, take a Toyota Landcruiser.

Photo by Felipe Labate on Unsplash